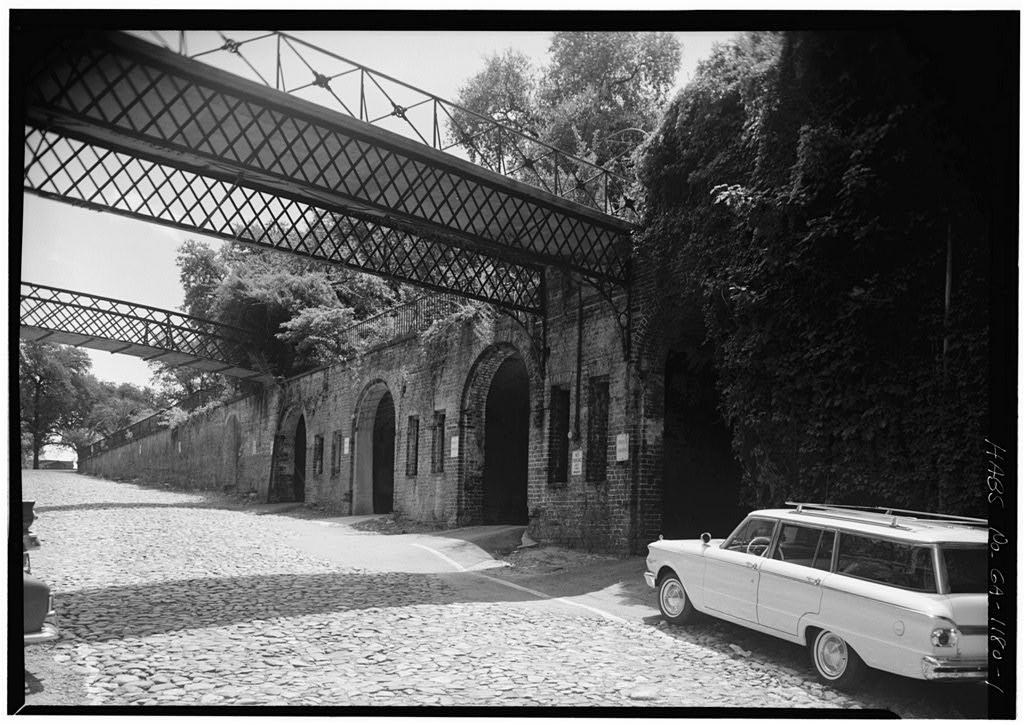 The Cluskey Embankment Stores, adjacent to City Hall on the east along the Drayton Street Ramp, were designed by architect Charles B. Cluskey and built as part of a larger public works project of the City of Savannah to construct retaining walls all along the bluff above Factors Walk and River Street to prevent erosion. Construction of these walls supported the development of the Factors Walk area. Cluskey, who worked principally in the Greek Revival style, also designed the Medical College in Augusta (completed 1837) and the Governor’s Mansion in Milledgeville (completed 1839).

In early 1840, the City of Savannah awarded a contract to Cluskey to build a retaining wall between Drayton Street and the old City Exchange, as well as raise the public walk above it to level with Bay Street and install an iron railing along the top of the wall. In May 1840, at the request of Cluskey, City Council authorized him to incorporate four brick stores, or vaults, into the retaining wall. The additional work was valued at $3,000.00. In lieu of paying Cluskey for the addition, the City agreed to lease the stores to him for a term of twenty years, beginning in October 1840. In January 1841, Cluskey transferred the lease to John Dillon to secure a debt of $2,900.00.

Work on the project progressed slowly and it is unclear how much of it was completed under Cluskey. In September 1842, Cluskey surrendered the job to William S. Walker, of James E. Walker & Brothers. Walker completed the job and the City made the final payment in December 1842. The City’s total investment in the project was $2,957.00, plus granting the twenty year lease. It is assumed that the Embankment Stores reverted to the City following the end of the twenty year lease in 1860.

In 1904, during the construction of City Hall, the largest vault collapsed trapping three African-American laborers. The men survived their injuries and the City had the contractor, Savannah Contracting Company, and sub-contractor, A. R. Stewart, rebuild the collapsed vault.

In 1962, the Embankment Stores were documented through photographs and measured drawings for the Historic American Buildings Survey (HABS) by the National Park Service. This documentation is maintained in the HABS collection by the Library of Congress. The Embankment Stores are included as a contributing structure in the Savannah Historic District’s National Historic Landmark designation (1966) and National Register of Historic Places designation (1969).

The Cluskey Embankment Stores are one of the oldest historical structures owned by the City, predating City Hall, Police Headquarters, and the Thomas Gamble Building. At least since 1962, the City used the vaults for parking.

Historical Use of the Cluskey Embankment Stores

The historical use of the Embankment Stores during the 19th century is still unclear at this time. Many people believe they were used to house slaves, though to date no primary documentation of this use has been found. In late 2011, the Shinhoster Youth Leadership Group, working with Vaughnette Goode-Walker, explored the history of the Embankment Stores and recommended they be restored based on their architectural merit. The young men of the Shinhoster Group presented their research project and recommendations to City Council at the February 9, 2012 Council meeting. Their recommendations included discontinuing all parking in the Embankment Stores and undertaking an archaeological investigation to supplement the historical research done to date in an effort to clarify their historical use.

In September 2012, the City of Savannah entered into an agreement with Georgia Southern University’s Research and Service Foundation, partnering the City’s Research Library & Municipal Archives department with GSU’s Department of Sociology and Anthropology to undertake an archaeological investigation, including extensive historical research, onsite excavation, and curation of any archaeological artifacts found (GSU is also leading the excavations at Camp Lawton). The final research and archaeological collection will be housed at the City’s Municipal Archives for public research use. In November 2012, the City permanently discontinued all parking in the vaults.

Excavation of the largest vault began in November 2012, and is progressing through all four vaults. Four Public Work Days were held between December 2012-March 2013, one per vault, allowing the general public a chance to interact with the archaeologists. Onsite excavations are expected to be complete in April 2013.

Photographs and Summary of Project Work